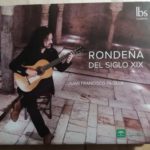 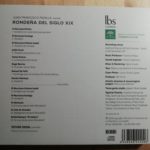 The album features many previously unpublished works associated with Granada that are recorded here for the first time ever. Resident scholar María Luisa Martínez was the album’s artistic director and research supervisor, in collaboration with the Graduate Center’s professor Peter Manuel, The Alhambra and Generalife, and the Andalusian Music Documentation Center (CDMA). Martínez and Manuel also wrote the album’s liner notes.

As Martínez describes it, “This work restores the musical memory of the 19th century guitar rondeña and highlights its sound, tradition and evolution from Granada as its epicenter.” (Quote translated from Spanish.) On the album, Padilla plays a historic 19th century guitar from the CDMA’s collection that is contemporary with the time the songs were composed.

The album has already received a lot of attention in the Spanish press, such as in Europa Press, La Vanguardia, and Ideal.