We last posted the glowing review that the disc received in Scherzo Magazine. Now, Rondeña has been reviewed in Melómano magazine, which awarded the album its gold medal! Congratulations again to the performer, Juan Padilla, and our musicologists here at the Graduate Center, Peter Manuel and María Luisa Martínez, whose research and artistic direction made the album possible. 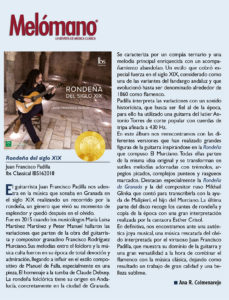 The review appears in Melómano‘s July print edition. Click on the image to read the full text.

As a postscript, we are also delighted to see that Melómano has reviewed Albert Guinovart’s new album, Nocturne, which contains the first studio recording of his 2013 Composer’s Commission, Skyshadows. It has been an excellent year for all of our friends and resident artists at the Foundation, and we are very happy for them and their continued success.