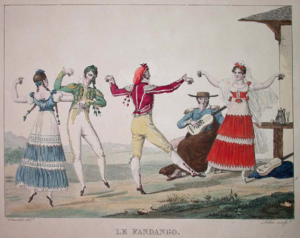 The Foundation for Iberian Music at The Barry S. Brook Center for Music Research and Documentation at the CUNY Graduate Center will host a conference on the global reach of the fandango at CUNY’s Segal Theater, April 17–18, 2015. (Saturday papers will be held at Alegrias at La Nacional, 239 W. 14th St, between 7th and 8th Aves.)

Read the Global Reach of the Fandango program

In The Mestizo Mind: The Intellectual Dynamics of Colonization and Globalization, Serge Gruzinski notes “the difficulty we experience even ‘seeing’ mestizo phenomena, much less analyzing them.” The fandango emerged in the early eighteenth century as a popular dance and music craze across Spain and the Americas.  While in parts of Latin America the term “fandango” came to refer to any festive social dance event, over the course of that century in both Spain and the Americas a broad family of interrelated fandango music and dance genres evolved that went on to constitute important parts of regional expressive culture.  This fandango family comprised genres as diverse as the Cuban peasant punto, the salon and concert fandangos of Mozart and Scarlatti, and—last but not least—the Andalusian fandango subgenres that became core components of flamenco. The fandango world itself became a conduit for the creative interaction and syncretism of music, dance, and people of diverse Spanish, Afro-Latin, Gitano, and perhaps even Amerindian origin.  As such, the fandango family evolved as a quintessential mestizaje, a mélange of people, imagery, music and dance from America, Europe, and Africa. Emerging from the maelstrom of the Atlantic slave trade with its cataclysmic remaking of the Western world, the fandango in its diverse but often interrelated forms was nurtured in the ports of Cádiz, Veracruz, Sao Paolo and Havana, and went on to proliferate throughout Europe and the Americas. Widely dispersed in terms of geography, class, and cultural reference, the fandango’s many faces reflect a diversity of exchange across what was once the Spanish Empire. This conference proposes to bring these cousins together, and to wonder how one form can shed light on another.

The conference will take place in the Graduate Center’s Segal Theater.

Please visit the link above for further details. If you are interested in volunteering, in exchange for waived registration fees, please contact Meira at fandangoconference.cuny@gmail.com.