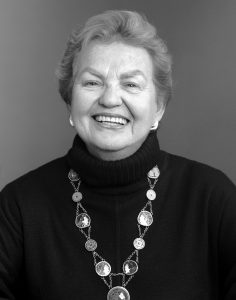 The Claire Brook Award, established in April 2018 by the Barry S. Brook Center for Music Research and Documentation (The Graduate Center of The City University of New York), honors an outstanding monograph, dissertation, edited collection, or exhibition catalogue on a designated topic related to the current work of the Brook Center. The topic may change over time to reflect the various and changing projects of the Center. For the first years, nominations will be accepted for works on music iconography or the relationship between music and the visual arts.

The winner will be chosen annually. The author(s) of the work will receive a certificate and an invitation to present a public lecture on the topic of the awarded publication at The Graduate Center of The City University of New York. In the event that the nominated work has multiple authors/editors, the lead author/editor will be invited to deliver the lecture. The award will include one economy-class round-trip airfare to New York and two nights in a New York hotel. If there are no strong candidates in a particular year, the award will not be given that year.

The initial award committee consists of the members of the editorial board of Music in Art, a journal published by the Research Center for Music Iconography, which is a project of the Brook Center. The journal’s editor serves as committee chair; the director of the Brook Center serves as an ex officio committee member. The committee may appoint ad hoc member(s) to review nominated works written in languages outside of its expertise. Committee members are listed here.

Nominated works may be published in any country and in any language. The work must have appeared (or have been defended) in the year prior to the nomination (e.g., works nominated for the 2018 award must bear a copyright date of 2017).

The nominating person/organization must arrange with the publisher to supply each member of the award committee with a print or electronic copy of the publication. Nominated publications must reach members of the committee before the end of August at the addresses found here. Publishers or individuals choosing to supply nominated publications in pdf, should send them to zblazekovic@gc.cuny.edu using WeTransfer app. Awards will be announced in December; and the public lecture by the winner will be arranged in the spring of the following year.

Nominations should be sent to the Brook Center for Music Research and Documentation, The Graduate Center, The City University of New York, 365 Fifth Avenue, New York, NY 10016, or by email to zblazekovic@gc.cuny.edu.

The award lecture will be held at The Graduate Center of The City University of New York, in the spring following the announcement of the award. The lecture must be conceived to appeal to a general audience.

Claire Brook (1925–2012) was vice president and music editor of W.W. Norton & Co. in New York, in a distinguished lineage that included Paul Henry Lang, Nathan Broder, and David Hamilton. She sponsored the publication of dozens of books in Norton’s series “Books that Live in Music,” including seminal works on the music of Africa, jazz, and contemporary music, as well as editions of Joseph’s Machlis’s The Enjoyment of Music and Donald Jay Grout’s A History of Western Music that have kept them at the forefront of the music textbooks ever since. She was the author of a spirited contribution on “Music Publishing Today” in MLA Notes (1975). In 1999 she was awarded the degree of Doctor of Music, honoris causa, by the New England Conservatory. After retirement from Norton, she served for a number of years as Executive Editor of Pendragon Press. Claire left a generous bequest to the Brook Center that has supported many of its activities over the years. It is in her honor that this award has been established.