Medieval Music Besalú is continuing their new tradition of holding a conference on medieval performance practice and research to open their annual performance workshops, which now has two sessions at different campuses: one in Besalú and another in Lleida, called International Medieval Meeting Lleida. The conference will be held at the University of Lleida in Spain, 29 June to 1 July 2020.

Papers may be submitted in English, Spanish, or Catalan. Submissions are due by 29 March 2020.

You can download a PDF of the call for papers here, or view below: 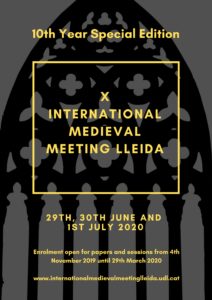 Musicology at IMML 2020 Call for papers

The study of medieval music has a long and established tradition in the field of musicology. Most of the work conducted through the years focuses on the study of manuscripts, repertoires, genres, poetic and musical forms, and composers.

Yet, performance practice and sound production are still insufficiently studied at large and even seen with some apprehension. This seems rather incongruous since medieval
music with all its compositional elements, its registers, and its preservation in written form was above all conceived as an experience for the ear. The act of performance made this possible, and in that evanescent moment the sacred and secular repertoires of medieval music were articulated and directly disseminated.

Thus, performance and sound should undoubtedly be placed at the center of medieval music research since its own foundation and essence are directly connected to them. Fortunately, this realization is encouraging not only more and more musicologists, but also philologists, archeologists, anthropologists, and performers to conduct research on these subjects. Since the information that has survived is fragmentary at best, these researchers have to resort to new interdisciplinary methods that combine traditional positivist musicology with music semiology, musical iconography, performance theories, empirical musicology, musical and experimental archeology, ethnoarcheology, acoustics, and the study of surviving musical instruments.

Following the success of the strand on medieval musicology at the International Medieval Meeting Lleida 2019, in 2020 we are presenting a second edition dedicated to medieval music performance and sound production. This strand will be conducted at the: 10th International Medieval Meeting Lleida 2020, (University of Lleida, Catalonia, 29-30 of June and 1 of July 2020).

Proposals
We invite researchers at all career stages to send abstracts of up to 250 words for 20-minute papers (in English, Spanish, or Catalan), along with a current CV. Abstracts and CVs should be submitted by 29 March 2020 to:
Màrius Bernadó (marius.bernado@hahs.udl.cat)
Mauricio Molina (maurus4@gmail.com)

Notification of acceptance will be sent via email around 10 April 2020.

Selected papers will be considered for publication in a new series dedicated to medieval music research sponsored by the University of Lleida.