Ángel Gil-Ordoñez, who is the conductor of one of the Foundation’s resident ensembles, can easily be characterized in Spanish as a todoterreno, a four-wheel drive who succeeds in traversing the most remote and distant zones of the orchestral landscape.  His collaborations with the Foundation have helped present in New York the music of Benet Casablancas, Xavier Montsalvatge, Carlos Surinach, Manuel de Falla, Robert Gerhard, Mauricio Sotelo, Óscar Esplá, Ernesto Halffter, and many more. 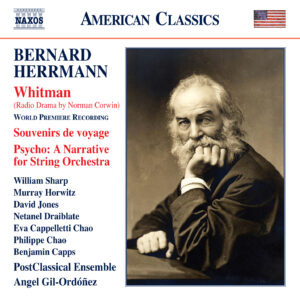 His latest project includes a survey of the Bernard Herrmann, composer of many soundtracks for Hitchcock, as well as other notable film directors.  You can hear Gi-Ordóñez’s performance and commentary here.  The recording includes Herrmann’s world premiere recording of Whitman a radio drama on the famous American poet (words by Norman Corwin) and Psycho:  A Narrative for String Orchestra mixing words and musical splashes of cinematic color and words.

He has tackled the film repertoire in concert and recording in many occasions including Redes, with music by Silvestre Revueltas and cinematography by Paul Strand, and The City with music by Aaron Copland.  His, so to speak, ecumenical tastes have also taken him to present Gamelan music and programs dedicated to the musical traditions of Armenia.  We are proud of his contribution through two decades to the programs of Foundation for Iberian Music and we hope to be able to continue working together for at least two decades more.