With COVID raging on both sides of the Atlantic, scholars and musicians are finding ways to continue their activities.  ZOOM has become an indispensable tool for our work, whether in the classroom, the e-concert hall, or its use in professional conferences. 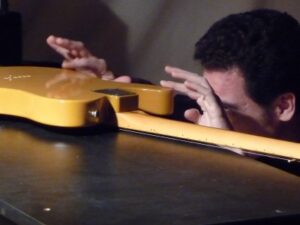 At the end of November 2020, organized by Fundació Assemblea de Ciutadans i Ciutadanes del Mediterrani (FACM), a group of scholars and artists in both music and the sciences gathered via Zoom to present their work under the aegis of the I Congrès Mediterrani Música I Ciència.

One of the highlights of the conference was the intervention of Ferrer-Molina with a sound installation titled CONCIERTO PARA TRENES DE METRO Y BANDA, which includes an intervention in the Alameda train station in Valencia (Spain) for fifty-two players within the “natural” environment of train sounds.

Ferrer-Molina has participated in many events at the Foundation for Iberian Music, including the 2017 Sound Art Festival with Miguel Álvarez-Fernández, Isaac Diego García and others.

Álvarez-Fernández and Ferrer-Molina were also guests at the CUNY Graduate Center’s Composers Forum, to discuss their music.  As described by Antoni Pizà, the curator of the event, their creative work inhabits the margins between experimental music and sound art. It explores conceptual art, performance, experimental video, and other possibilities for developing the audience’s relationship with sound. They engage with these questions involving intersections through concert pieces, sound installations, sculptures, curatorial projects and many other manifestations.

Moving forward a different kind of musical experience, of special interest was the intervention of guitarist Mirza Redžepagić, which explored some similarities between Bosnian traditional music and flamenco.

The two-day event is on two different posts on YouTube corresponding to the first and second sessions.

Also, check out the web of the Fundació Assemblea de Ciutadans i Ciutadanes del Mediterrani (FACM).  About the conference they state:  “The Mediterranean Congress “Music and Science” aims to be an annual event that brings together different personalities of music and science in the Mediterranean area in order to share aspects that year after year have affected the interrelation between music and music. science.  In its first edition, on November 27 and 28, 2020, in online format, the central theme of the Mediterranean Congress “Music and Science” is the use of ICT in the Covid scenario, while the pandemic situation has forced the science and music, disciplines that require intense teamwork, to transfer a large part from its work to the internet.  Organized by the ACM Foundation in collaboration with Mostra Viva del Mediterrani and the ACM circle of Sarajevo.”

In the end, nowadays it all seems to be circling back to COVID and its consequences.