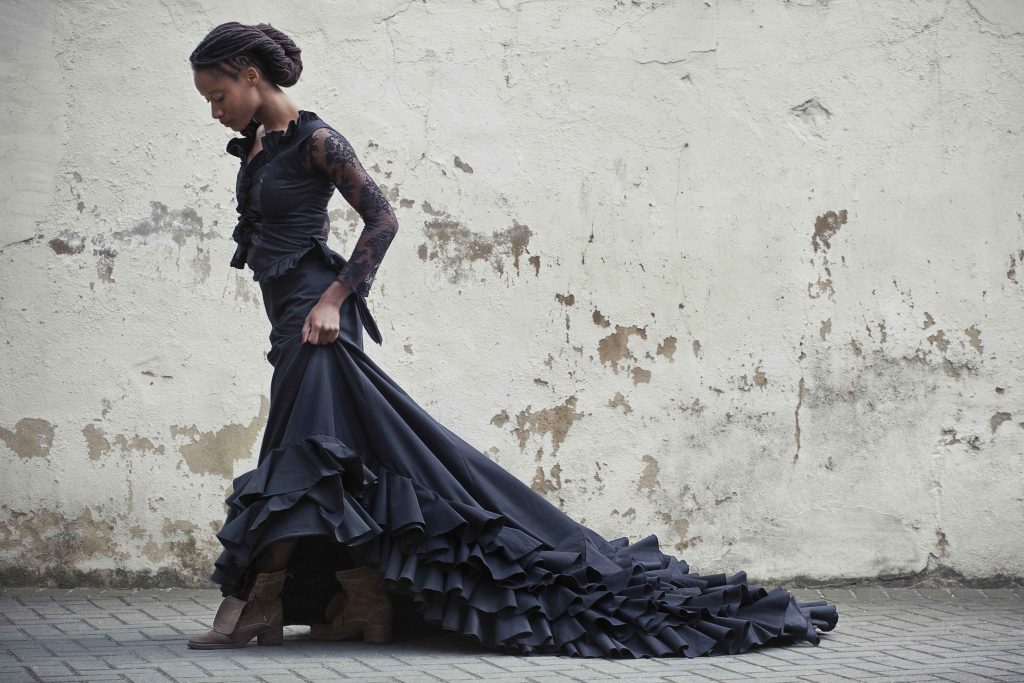 The Foundation for Iberian Music at The Barry S. Brooks Center for Music Research and Documentation at the CUNY Graduate Center and the Department of Film, Media, and Performing Arts at The Fashion Institute of Technology are hosting a two-day international conference and flamenco performance festival in New York on October 15–16, 2018.

This interdisciplinary series of events, free and open to the public, fosters dialogue between scholars, flamenco artists, and audiences about flamenco as a diasporic and migratory art. We aim to articulate the work of dance in transmitting culture—including ideas about race—and to broaden understanding of the historical and political forces driving these processes. Marking the release of K. Meira Goldberg’s monograph Sonidos Negros: On the Blackness of Flamenco (Oxford University Press, fall 2018), The Body Questions will present research and experimentation which foregrounds the power of the body to question, to disrupt outmoded discourses of “authenticity,” and to work instead to relocate flamenco within a vibrant intersection of art as a celebration of diversity and agency against racism. We seek to identify, deconstruct, reflect on, debate, and ultimately reformulate our understanding of Spain’s impact on slavery, of dance as questioning and disrupting racism, and of flamenco as an Africanist art form.

Click here for the Call for Papers. . The deadline has been extended to August 21.

On October 15, a performance festival, free and open to the public, will be held at Fashion Institute of Technology (FIT) in the Haft Theater (Feldman Center building). It features a screening of Miguel Ángel Rosales’s powerful documentary film, Gurumbé: Canciones de tu memoria negra (2016), telling the little-known story of slavery in Spain, along with a performance by Yinka Esi Graves, whose emergence onto the international stage is disrupting the “color barrier” in flamenco, and a conversation between Rosales, Graves, and renowned dance historian Dr. Brenda Dixon Gottschild (Digging the Africanist Presence in American Performance, 1996). Two additional concerts showcase a diverse group of black and brown flamenco dancers, whose work challenges us to see flamenco in a new light.

John Amira, master percussionist in a number of Cuban and Haitian traditions, will present a lecture/demonstration on overlaps and coincidences between flamenco and Afro-Caribbean rhythms.

Aliesha Bryan, who won First Place in the 2016 Flamenco Certamen USA and is developing a performing career in both the United States and Spain, will present new work.

Flamenco Latino, founded by Basilio Georges and Aurora Reyes, has been exploring the danced and musical intersections of flamenco and Latin forms for decades. They will present Sevillanas AfroCubanas.

Kevin LaMarr Jones, Director of CLAVES UNIDOS, presents an experience for participants to discover, share, and celebrate the historical and social connections of African dance.

Niurca Marquez, a Latinx flamenco artist questioning colonization and its effect on the body and psyche, whose experimental work with her group Nu Flamenco ranges from fusion with other forms such as hip hop to radically surreal and experimental dance theater.

Justice Miles, an MFA student in the flamenco program at University of New Mexico, presenting excerpts from her work, Ink on Cotton.

Arielle Rosales, a Mexican-American Jewish Boricua New Yorker whose unruly explorations are on the cutting edge of flamenco experimentation.

Nelida Tirado, a New York-based flamenco dancer who, among other accolades, was selected as one of Dance Magazine’s 2007 “25 To Watch,” will present excerpts of her work Dime Quien Soy, a meditation on the entanglements of her Puerto Rican and Spanish flamenco dance lineage.

José Moreno is the son of famous flamenco artists Estrella Morena and Pepe de Málaga, José began his flamenco career during his childhood. Since then José has been invited to perform in various companies and with distinguished artists such as: Manolete, Pastora Galván, Pedro Cortés, Omayra Amaya, Roberto Castellón, Ángel Muñoz, Belén Maya, Chano Domínguez, Jorge Pardo, among many others.

Pedro Cortes comes from a family of Spanish Gypsy guitarists and began his studies with his father and the esteemed Flamenco guitarist Sabicas. Having toured professionally since the age of 17, he is gaining international recognition as a soloist and composer. He was commissioned by the Cohen brothers to provide the score for Paris Je T’aime. He is artistic director of his own flamenco group as well as musical director of Palo Seco.

Guillermo Guillén began his career as a flamenco guitarist in 1999 and moved to Seville in 2006. He worked with singer Rocío Márquez, with whom he was awarded the Lámpara Minera” prize in 2008. He has composed and arranged for several flamenco recordings as well as accompanied renowned artists such as Paco Mejias, “El niño de Elche”, Esperanza Fernandez, José Galván.

Dr. Brenda Dixon Gottschild is Professor Emerita of dance studies, Temple University. She performs with choreographer (and husband) Hellmut Gottschild in a form of somatic and research-based collaboration for which they coined the term, “movement theater discourse.” She is the author of Digging the Africanist Presence in American Performance: Dance and Other Contexts, Waltzing in the Dark: African American Vaudeville and Race Politics in the Swing Era, and The Black Dancing Body – A Geography From Coon to Cool.

On October 16, a symposium will be held by the Foundation for Iberian Music at the CUNY Graduate Center, Segal Theater and room 9204. From pre-modern Christmas pageants all the way through to Jordan Peele’s “sunken place”—a place where, as Simone de Beauvoir has written, the subjectivity of “sovereign and unique” beings “is crushed by the dark weight of other things,” Whiteness and Blackness have been conjoined in a series of negative correlations. Purity and pollution, harmony and dissonance, over and under, order and disorder, Christian epiphany and damning confusion have limned the edge distinguishing freedom and personhood from enslavement and abjection. Yet in these paradigmatic dyads one term always implies—indeed, defines—the other; in these relations there is never erasure, but rather evidence of white culture’s perverse fascination—envy, even—with the sonorous, dislocated, inciting, and infinitely suggestive products of black culture. We seek in this gathering to attend to flamenco’s cacophony, dissonance, and disorder as vibrating with a fugitive, turbulent Otherness, hinting at the specters of alternate social, spiritual, and aesthetic universes.