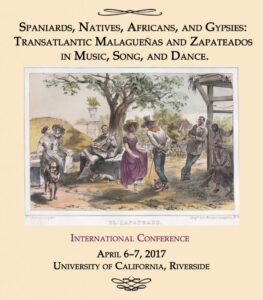 There is no conference fee for attendees. Papers will be 20 minutes, with 10 minutes of discussion. Please contact  K. Meira Goldberg at fandangoconference.cuny@gmail.com with any questions.

In the inaugural conference in this series, Spaniards, Indians, Africans, and Gypsies: The Global Reach of the Fandango in Music, Song, and Dance, we gathered in New York to explore the fandango as a mestizaje, a mélange of people, imagery, music and dance from America, Europe, and Africa, whose many faces reflect a diversity of exchange across what were once the Spanish and Portuguese Empires.[1] At that conference, we considered the broadest possible array of the fandango across Europe and the Americas, asking how the fandango participated in the elaboration of various national identities, how the fandangos of the Enlightenment shed light on musical populism and folkloric nationalism as armaments in revolutionary struggles for independence of the eighteenth and nineteenth centuries, and how contemporary fandangos function within the present-day politics of decolonialization and immigration. We asked whether and what shared formal features—musical, choreographic, or lyric—may be discerned in the diverse constituents of the fandango family in Spain and the Americas, and how our recognition of these features might enhance our understanding of historical connections between these places. We hoped with that pioneering effort to gather international, world-renowned scholars to open new horizons and lay the foundation for further research, conferences, and publications. We are immensely proud of that 2015 gathering, and of the two published editions of its proceedings: in bilingual form in the Spanish journal Música Oral del Sur (vol. 12, 2015) and in English (forthcoming 2016 from Cambridge Scholars Publishing).

But the inaugural conference merely set the first stone. All of the participants in the 2015 meeting agreed that conversations should continue, relationships should develop, and that many questions and avenues of research remain. We are therefore pleased to issue a call for papers for the upcoming conference on two nineteenth-century forms related to the fandango—at least in their standing as iconic representations of Spanishness: malagueñas and zapateados.

How do these forms comprise a “repertoire” in performance theorist Diana Taylor’s sense of the term as enacting “embodied memory” and “ephemeral, nonreproducible knowledge,” allowing for “an alternative perspective on historical processes of transnational contact” and a “remapping of the Americas…following traditions of embodied practice”?[2] The Center and the Foundation invite interested scholars, graduate students, and practitioners including musicians and dancers to propose presentations on all subjects related to malagueñas and zapateados. Although we are not limited to them, we expect to gain special insight into the following topics: