Last December we announced the new release of Rondeña del Siglo XIX, by guitarist Juan Francisco Padilla. The album consists of works linked to Granada, many of them previously unpublished. Our own resident scholar María Luisa Martínez served as the artistic and historical director for the album, with Graduate Center professor Peter Manuel. (You can read more about the project in the link above.)

Spain’s Scherzo magazine recently featured the album in a glowing review, by Josemi Lorenzo Arribas. Congratulations to Juan, María Luisa, and Peter! Click the image below to read the review. 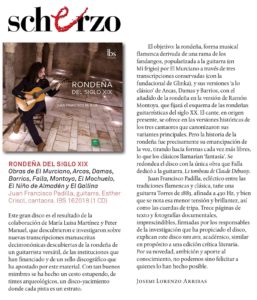