On November 12, the Graduate Center’s Segal Theater will host a retrospective concert of Josep Prohens’ piano works, as well as a masterclass with Prohens himself and pianist Andreu Riera. 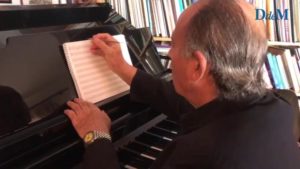 Prohens was the first recipient of the Foundation for Iberian Music’s Composer’s Commission in 2005, for which he wrote Dreams/Somnis for solo piano. (Click on the above link to listen!) Prohens has been composing since 1978 and is the author of Ensenyament de la música a Felanitx (The Teaching of Music in Felanitx), about music education in his hometown. He has lectured at Conservatori Professional de Música de Felanitx since 1972 and has served on the composition faculty at conservatories throughout the Balearic Islands. He is also president of Royal Academy of Fine Arts of San Sebastián of the Balearic Islands.

Prohens and Riera both teach currently at the Conservatori Superior de Música de les Illes Balears. Riera recently released an album of Prohens piano works, Ficció, and he also appeared on the 2017 album Impressions. Riera has won numerous piano prizes, including the Infanta Cristina (Madrid), Caja Postal in Madrid, Alonso Competition in the city of Valencia, Frederic Mompou (Barcelona), Jacinto Guerrero and the Mozart Competition, Salzburg Mozarteum. He has performed throughout Europe and North America, including right here in NYC, with our own Perspectives Ensemble.

Riera and Prohens will host a master class on November 11 at 12:30 at City College’s beautiful Shepard Hall.

A concert of Prohens’ piano works will be held on November 12 at 6:30. The concert will include Prohens’ commission, Somnis, “La Llum” from Ombres, and his new work Ficció, among many more.

Co-organized by the Foundation for Iberian Music and Institut Ramon Llull.