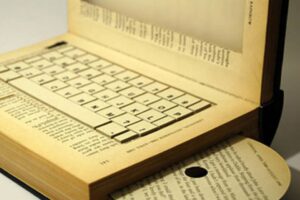 For better or worse, we are all now immersed in the Digital Humanities.  Forget the Parisian cafés and the endless conversations, legs crossed, cigarette-holding, cuddling a glass of Pernod with melting ice cubes, current intellectual debates take place in front of screens of all sizes, devices of all makes, smartphones, computers, tablets, and through platforms of immense interactive capabilities.

First, there was a budding idea and perhaps a question (what can new technologies do for the traditional arts and humanities?) from which, in the last decade, there has been many responses.  It is worth mentioning here, the pioneer role of Barry S. Brook, the founder of the doctoral programs in music at the CUNY Graduate Center.  In the 1960s, he saw the enormous possibilities of the application of computers to musical scholarship.  Many of his initiatives (see his biography) involved the creation of massive data banks and its availability on digital formats from everywhere in the world.  This spirit of making information available to sans frontiers scholars continues to this day to be the lightning rod of the Brook Center and its constituents, including the Foundation for Iberian Music.  Think of RILM Abstracts , Ridim, RCMI, Music in Gotham, and the Eighteenth-Century Symphony Archive, just to mention a few of the digital initiatives based at the Brook Center.  They all employ the talent, knowledge, and endless energy of CUNY students, researchers, and faculty.

The Graduate Center still continues to be at the avantgarde of the digital world, with a program specifically created for the digital humanities.  The CUNY Center for the Humanities offers free online access to a diversity of conversations with preeminent thought leaders, and The Dominican Studies Institute at The City College of New York has several wonderful online and freely accessible archives.

Just recently, The Graduate Center received a $375,000 NEH for a project headed by professor Matthew K. Gold called “Manifold in the Classroom: Digital Publishing for Open Pedagogy.”  One of its results it will be an open-access publishing platform created by CUNY’s GC Digital Lab called Manifold.

In the last decades, digital Iberian musical scholarship has given great strides.  A few years ago, the Consejo Superior de Investigaciones Científicas created a Fondo de Música Tradicional (Traditional Music Holding) an enormous data base.  The project is directed by Dr. Emilio Ros-Fábregas, a CUNY alumnus and former faculty member, as well as an early researcher at the Brook Center.  In addition, Dr. Ascensión Mazuela-Anguita, one of the main researchers working on the project, was recently also a scholar in residence at the Foundation for Iberian Music.

Of course, many music publications have in recent years moved to online platforms.  With the Instituto Cervantes Observatorio at Harvard University we published the proceedings of our 2019 Joaquín Rodigo conference.   We also published the proceedings of several conferences in Música Oral del Sur, and its editor in chief, Reynaldo Fernández-Manzano has lectured here at the Foundation in several occasions.  Another eminent colleague, Walter A. Clack has visited us in many occasions as a lecturer and conference presenter.  He is the founder of the e-journal Diagonal an incredible platform for digital publishing based at the Center for Iberian and Latin American Music.

Catching up with the new reality of online work, many scholarly societies such as the Renaissance Society of America and the American Society for Theatre Research have modified membership fees, especially for contingent faculty, independent scholars, and graduate students, to a “pay what you can.” And many performing arts organizations, such as Danspace Project offer a blend of performance and community dialogue online. Finally, online digital resources such as the Biblioteca Digital Hispanica from the Biblioteca Nacional de España, Gallica from the Bibliothèque Nationale de France, the Oxford Cantigas de Santa María Database , and of course the New York Public Library are more important than ever to scholars whose travel to archives is limited due to COVID.

We at the Foundation for Iberian Music, having created the Fandango Project, a series of conferences and publications that started out in New York but has since branched out to Los Angeles and Veracruz, México, and in 2022 to Africa, are in the initial planning stages of a Digital Fandango Project, an online resource that will connect scholars to scholarship and to each other. Stand by for more news!

It is the beginning of a new semester, and we are all struggling with online teaching, COVID19 has propelled us to relearn it effectively.  As scholars, we are also impelled to embrace the digital humanities in our own research and its dissemination.  The challenges, needless to say, are enormous, but the possibilities are also immense.  As humanists, we’re wise to keep a dab of skepticism around all this newness—critical thinking is what we teach our undergraduates, in the end.  We, however, would be absolute fools if did not take advantage of this opportunity to partake in the transformation of the humanities in this new digital era.  And, as far as of Paris and our longed-for Pernods, as they say, we will always have Paris.