There’s so much talk right now whether NY has lost its bite and how much better it was that “old” NY of times past.  And, yes, COVID has changed our city and our cultural habits, but perhaps a better debate would be how long this apparent debacle will last; how long without the Met and the MET, Broadway and off-Broadway, and even off-off-Broadway.  Barely a week ago, it would have been the birthday of Assunta “Sunny” Carballeira, pianist, singer, and above all Spanish music’s grande dame of “old” NY.  She would have turned 95. 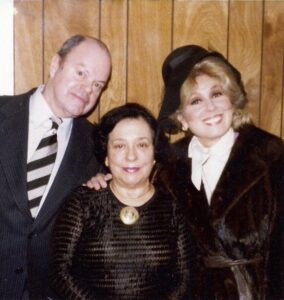 Born in Queens, NY, the daughter of Italian parents, she married Manuel Carballeira, a prominent doctor of Galician extraction and for fifteen years the Metropolitan Opera’s physician.  From an early age she performed in the pioneer and bizarre “all girls” Phil Spitalny Orchestra, and later in the smoky, sultry rooms at the Café Pierre and the Hotel New Yorker.  Radio and TV were also part of her artistic outlets and she co-hosted several programs for CBS.

Most importantly for many of us, later in life, in addition to her family, she was the port of entry, so to speak, of all Spanish—and especially Catalan—musicians.  She hosted in NY essentially all musicians who were engaged to perform or were developing careers here:  Andrés Segovia, Carlos Surinach, Montserrat Caballé, Victoria de los Ángeles, José (Josep) Carreras; Juan (Joan) Pons; Plácido Domingo; Jesús López Cobos; Frederic Mompou, Carmen Bravo, Xavier Moltsalvatge, and especially her close friend Alicia de Larrocha.  Her home in Queens, NY, her summer place on Long Island, but especially the old Spanish Institute, in Manhattan’s posh Upper East Side, were the sites of numerous receptions, lectures, concerts, and cocktail parties honoring those composers and performers even before they were known to American audiences at large.

“I was just on the phone with Victoria [de los Ángeles],” she would mention in passing when speaking with this chronicler.  And then, “what are we going to do with José [Carreras].  We need to bring him back to Carnegie!,” she would conclude emphatically.  And it’s true, she was highly selective with her friends, but had never forgotten her Italian immigrant roots and those of her kind Galician husband.  She attended the exclusive Finch College, a small higher education institution in, again, Manhattan’s exclusive Upper East Side— Nixon’s daughter and Isabella Rosellini, being among the many NY’s luminaries, socialites, and philanthropists who attended the now-defunct school.  And also, in the Upper East Side, at our own CUNY Hunter College, she co-organized an eccentric fundraising for the International Piano Library in which, among many other performances, eight pianists (including Arrau, de Larrocha, Borge, and Guiomar Novaes) played simultaneously (“almost in unison,” said tongue-in cheek the prominent critic Harold C. Schonberg) Chopin’s “Heroic” Polonaise.  In the last twenty years or so, the Foundation for Iberian Music benefited enormously from Sunny’s rolodex (have we all forgotten that useful, old contraption?) in organizing events honoring the music of Halffter, Montsalvatge, Surinach, Nin-Culmell, Granados, Larrocha, and others, and for that we’re extremely grateful.