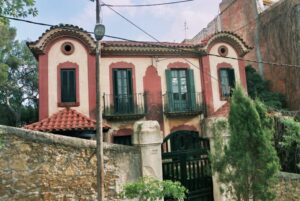 Like Paris and Berlin, interwar Barcelona (c.1920-1936) was a cauldron of international modernist creativity:  Schoenberg composed Moses und Aron, Webern conducted the Pau Casals Workers’ Orchestra, and Alban Berg premiered his Violin Concerto.  This powerful momentum shaped a generation of composers (Robert Gerhard, especially, but also Joaquim Homs, and, later on, Benet Casablancas, who was awarded the 2012 Foundation for Iberian Music’s Composer’s Commission, among others) and inspired the work of a generation of visual artists and literary minds (Antoni Tàpies, Joan Brossa, and J.E. Cirlot, among others). In Barcelona in the thirties, as Rimbaud asserted in a different context:  “Il faut être absolument moderne.”

In 2006, the Foundation for Iberian Music dedicated a series to “Schoenberg in Barcelona.”  The composer’s daughter, Nuria Schoenberg-Nono, unable to attend, send us a kind note that read:

As you can well imagine, Barcelona has a special significance for me. During my father’s stay there, he not only gave birth to the second act of his opera Moses und Aron, but my mother gave birth to their first child, a girl to whom my father wanted to give the most popular name in Barcelona: Nuria. I think the fact that he wanted that name for me shows how much he felt at home in that beautiful city. My father’s contract with the Akademie der Künste in Berlin allowed him a six-months’ composing leave, which he spent in warmer cities, since he suffered from asthma and could not endure the cold German winter. Invited by pupil and friend Roberto Gerhard to spend the winter months in Catalonia, my parents prolonged their sojourn until the beginning of June, when my father had to return to Berlin to take up his duties again as Professor of the masterclass in composition. He did not wish to return to Berlin and had asked friends to try and find a music patron who could assure him a salary so he could stay in Barcelona, but to no avail. And it was not only the warm weather which had attracted him, I am sure it was also the warm welcome he had received there by his old and new friends. In the ’80s my daughter and I were invited to attend the premiere of Moses und Aron in Barcelona. I will never forget the superb hospitality shown us and the great impression that the city and its people made on me. I am really sorry that I cannot be with you all to take part in your event. I hope to be able to collaborate with the Foundation in the near future.  I think I got carried away thinking about Barcelona. All the best, Nuria

The history of the friendship between Arnold Schoenberg (1874-1951) and Robert Garhard (1896-1970) dates back to 1923, when the Catalan composer wrote to Schoenberg requesting the possibility of taking composition lessons with him.  In his request letter, he included the score of two recent works, Dos apunts (Two Sketches for Piano) and Set Haikus (Seven Haikus for chamber ensemble and voice).  After an interview, Schoenberg accepted him as a student; shortly after, Gerhard became his assistant.  While in Vienna, Gerhard met his future wife Leopoldina (“Poldi”) Feichtegger and became friends with Berg and Webern.  In 1925, Schoenberg took over Busoni’s class at the Preussische Akademie der Künste and Gerhard followed him there as his student and assistant until 1928. Also in 1925 and after an invitation by Gerhard, Schoenberg visited Barcelona to conduct his Pierrot Lunaire. 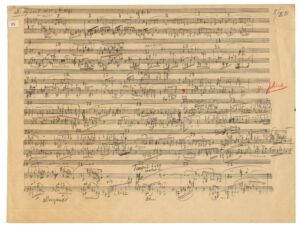 Because Berlin’s anti-Semitic atmosphere, during the period 1931-32, Schoenberg and his wife moved to Barcelona as the guests of the Gerhards.  There, enjoying its moderate winter weather, Schoenberg composed most of Moses und Aron.  That season, Gerhard arranged for Schoenberg and Webern to conduct the Casals Orchestra.  In 1936 the 16th ISCM festival was held in Barcelona and Gerhard, organized the premiere of Berg’s Violin Concerto.  As a tribute to Barcelona and to Gerhard’s hospitality, the Schoenbergs named their daughter Nuria (a typical Catalan name).  She was born in Barcelona in 1932 and married the Italian composer Luigi Nono.

A friend and collaborator of Miró, the architect Josep Lluís Sert, and Dalí, Gerhard’s music “displayed an increasingly radical exploratory outlook and until his death contributed energetically to the development of serial and electronic composition, and to timbral and textural innovation” (New Grove).  To be sure, Gerhard learned from Schoenberg “clarity and concision of form, intricate contrapuntal working, textural variety and a unified harmonic idiom” (New Grove).

Here are some useful, albeit random, dates to understand Schoenberg’s relationship with Barcelona:

1923        Robert Gerhard sends Two Sketches for piano to Schoenberg and becomes his student in Vienna and, later, Berlin

1925        Festival Arnold Schoenberg in Barcelona and other Catalan towns; Pierrot Lunaire, Kammersymphonie, a selection of songs and other compositions are performed

1931        Schoenberg arrives in Barcelona in October.  Settles in a modernista sunny house

1932        Writes Moses und Aron and Klavierstück Op. 33b.  Nuria Schoenberg (later Nono) is born in Barcelona and is baptized by musicologist and priest Higini Anglès.  Anton Webern conducts Verklärtenacht and Acht Lieder Op. 6, among other compositions

1933        Casals and Schoenberg plan future concerts in Barcelona, including an arrangement for cello and orchestra of the Monn keyboard concerto

1956        Tàpies, Brossa, Cirlot and other members of Dau al Set place a plaque at the Schoenberg’s former residence in Barcelona

To complete the picture of that special moment in music history, just recently, professor Paloma Ortiz-de-Urbina Sobrino has just published an extremely valuable book.  Her work—actually several multilingual volumes—contains the complete correspondence between Schoenberg and his student Robert Gerhard (including that of their wives).  There are a total of eighty-two letters, postcards, telegrams, and other similar items.  Most of them are in German and some in English; but one item is in French and another in Catalan.  Professor Ortiz-de-Urbina has transcribed, edited, and translated all the items for one volume into English and for a second volume into Catalan all published by the Biblioteca Nacional de Catalunya.  There is also a different edition in German put out by Peter Lang.  (In total there are three books.)

Professor Ortiz-de-Urbina is a Gerhard specialist, a musicologist, and a polyglot who, without her absolute mastery of all these languages as well as her profound knowledge of the pertinent musicological literature, would not have been able to produce these singularly important volumes.  These letters are not only relevant for musicologists interested in Schoenberg and Gerhard’s studies, but also for the general, educated reader who wants to understand—and even enjoy learning about—that special moment when those two creative minds met and spoke frankly in the intimate mode of the missive, closer to the personal diary than to the theoretical treatise.  It is clear, additionally, that Schoenberg had a powerful impact on later Catalan artists such as idiosyncratic, multidisciplinary Joan Brosa, painter Antoni Tàpies, and the poet J.E Cirlot, who wrote apropos of Schoenberg’s stay in Barcelona these beautiful lines:

And just to finish, the following valuable sources, Gerhard’s testimony and an early review, might help us understand Schoenberg’s experience in Barcelona as well as the early reception of his music:

He [Schoenberg] loved his window….  He had his table right against the window. And he lifted his eyes up from the score Moses and Aron, which, as you know, he finished the second act in Barcelona in that room—this signed at the end “Barcelona, 10th of March, 1932.” When he lifted his eyes from the score, what he saw was that fantastic panorama. It was a smallish room. It had a small upright piano, a table perhaps, a sofa, and a few armchairs and that was all. And Mrs. Schoenberg and my wife sat at the back of the room chatting lustily, you know, with quite without the slightest regard for that man composing there on the window because Schoenberg insisted. He wanted them to talk loud. He hated to hear somebody whispering. I’m sure he listened with a kind of a… with a quarter of his ear, and when something came up that was gossipy, you know, he joined the ladies. He jumped up and joined the ladies and mixed in the conversation. When he had enough, he went back to his table, sat down, and was concentrated the next instant, deeply concentrated, completely oblivious, deaf to the latest conversation.