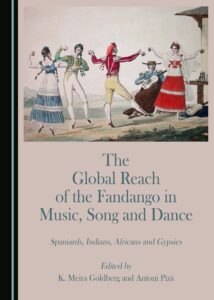 The fandango, emerging in the early-eighteenth century Black Atlantic as a dance and music craze across Spain and the Americas, came to comprise genres as diverse as Mexican son jarocho, the salon and concert fandangos of Mozart and Scarlatti, and the Andalusian fandangos central to flamenco. From the celebrations of humble folk to the theaters of the European elite, with boisterous castanets, strumming strings, flirtatious sensuality, and dexterous footwork, the fandango became a conduit for the syncretism of music, dance, and people of diverse Spanish, Afro-Latin, Gitano, and even Amerindian origins. Once a symbol of Spanish Empire, it came to signify freedom of movement and of expression, given powerful new voice in the twenty-first century by Mexican immigrant communities. What is the full array of the fandango? The superb essays gathered in this collection lay the foundational stone for further exploration.

Meira Goldberg “La Meira” is a flamenco dancer, teacher, choreographer, and historian. She is co-curator of the 2013 exhibit 100 Years of Flamenco in New York at the New York Library for the Performing Arts, co-editor of the anthology Flamenco on the Global Stage: Historical, Critical, and Theoretical Perspectives (2015), and author of the forthcoming Sonidos Negros: On the Blackness of Flamenco.

Antoni Pizà is a musicologist and writer. He is the director of the Foundation for Iberian Music at the Graduate Center of the City University of New York and a member of its Doctoral Faculty.