The Way of the Moderns gathers the talks organized by the Barry S. Brook Center of Music Research and Documentation that took place from 2012 to 2016 at The Graduate Center of The City University of New York (CUNY).

Exploring the concept of musical modernism from many different perspectives―including the audience’s often initial rejection; the dominance of popular genres; the blurring of musical genres and categories; the alleged incapacity of modernism to express feelings and its intellectual aloofness; the struggle for an audience in times of a distracting attention economy; the transition from modernist to postmodernist aesthetics; the multicultural and collaborative aspects of many recent musical creations; and the need for questioning the ethics of musical works―they present a non-systematic and yet insightful assessment of some of the crucial issues around contemporary music. The texts address the changing consumption, creation, contexts, and valuations of today’s concert music and, at the same time, highlight the agency of its practitioners―composers, performers, scholars, critics, and the audience―who pursue “the way of the moderns.” 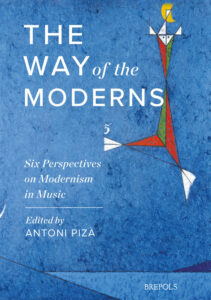 Antoni Pizà is the director of the Foundation for Iberian Music, where he has organized dozens of events, including conferences, talks, and concerts. The Foundation is a project of the Barry S. Brook Center for Music Research and Documentation at CUNY Graduate Center. Author of many books and articles, he has also taught for over twenty-five years at CUNY and has curated the lecture series on which this publication is based.

ACT I: The Challenges of Modernistic Music,
by Charles Rosen
A Conversation with Daniel J. Wakin
Audience Q&A

ACT II: We Are What We Hear, by Paul Griffiths
A Conversation with Jeffrey Milarsky

ENTRE’ACTE I: The Creative Pulse of Collaborative Aesthetics,
by Philip Glass and Claire Chase
Audience Q&A

ACT III: Walking Among Noise: Tonality, Atonality,
and Where We Go from Here, by Roger Scruton
A Conversation with Greil Marcus
Audience Q&A

Act IV: The Many Dangers of Music, by Richard Taruskin
A Conversation with Scott Burnham
Audience Q&A