We at the Foundation for Iberian Music have been following the 1619 Project from The New York Times with great interest. We were especially inspired by Wesley Morris’s entry on The Birth of American Music, because it not only details the enormous debt that North American popular music owes to African American music, but also articulates the outsized hope and love for the world that black music sings.

From the Iberian and Latin American perspective, 1619 is but one chronological landmark in the history of racism and the transatlantic slave trade. As Resident Scholar K. Meira Goldberg explores in her monograph, Sonidos Negros: On the Blackness of Flamenco (Oxford University Press, 2019), the aporetic politics of what we now think of as “race” originated in what is now Spain. On the cusp of the world-shattering European conquest of the Americas, racial (racist) ideology originated in Catholic battles against Judaism and Islam on the Iberian Peninsula as the casting of religious difference onto the surface of the skin. Christian universalism justified the barbarities of the transatlantic slave trade, but paradoxically also undermined the racial categories it engendered. Slavery and forced conversion to Christianity were claimed as boons to their victims, yet to deny any human beings the possibility of redemption from their abject state was to deny Christ himself. To understand how fundamental Spanish racial thinking is to current ideologies of race, consider that the brand used to mark slaves, often on their faces, was the word “esclavo (slave), symbolized as an “S” and a “clavo (nail) in this manner: “$.”

Spain sowed our ideas of race as an inexpungable stain, and the first blacks to came to the Americas came on Spanish ships. A fantastic resource for the study of this pre-1619 period can be found at the CUNY Dominican Studies Institute’s web resource First Blacks in the Americas: The African Presence in the Dominican Republic. But we at the Foundation for Iberian have also contributed to recognizing and celebrating our tangled roots.

The second conference in this series, Transatlantic Malagueñas and Zapateados in Music, Song and Dance was held at the University of California, Riverside on April 6–7, 2017. The anthology stemming from this conference has just been published (Cambridge Scholars Publishing, 2019). The third international fandango conference, Ritmos transatlánticos en música, canto y baile, was held in Veracruz, México on April 11–13, 2019. Proceedings will be published in 2020 in Música Oral del Sur. We are currently planning a fourth conference in the series, Natives, Africans, Roma, and Europeans: Transatlantic Gestures in Music, Song, and Dance, to be held in Africa in 2021. (Announcement and CFP forthcoming.)

On October 15–16, 2018 the Foundation co-organized a performance festival of flamenco artists of color and an international academic conference, The Body Questions: Celebrating Flamenco’s Tangled Roots, which was held at the Fashion Institute of Technology and the Foundation for Iberian Music at the CUNY Graduate Center. This event was funded by a Humanities New York Action Grant, and by a grant from the Gladys Krieble Delmas Foundation, and was supported by Afropop Worldwide, Flamenco Vivo Carlota Santana, and The Spanish Benevolent Society – La Nacional NYC. Afropop published a wonderful program on “The Hidden Blackness of Flamenco,” as well as an interview with Meira Goldberg.

In addition to these conferences, we have facilitated screenings of the feature-length documentary Gurumbé: canciones de tu memoria negra by Miguel Ángel Rosales, a film which underscores and explores the formative contributions of Afro-Andalusians to flamenco. Gurumbé can be streamed through FilmIn.

There is much to be gained from recognizing not only the tangled roots of the music we love, but simply in appreciating the beauty of our shared culture and of the possibility of finding each other and recognizing each other inside that circle of art and of celebration. 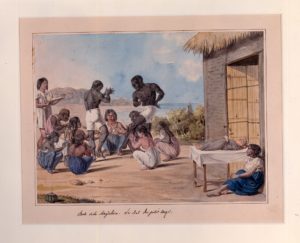