Pianist Adam Kent has just issued a new album entirely dedicated to Pulitzer Prize winner and CUNY colleague Tania León.  “Teclas de Mi Piano” features eleven piano works that were composed across a span of almost fifty years.  The album opens with the eight-minute long HOMENATGE, the Foundation for Iberian Music’s 2011 Composers’ Commission.  This vigorous piece is dedicated to Catalan composer Xavier Monstsalvatge in a kind of a counter colonial wink.  The piece was premiered in 2012 by Adam Kent at Carnegie Hall, then dashingly choreographed by Pedro Ruiz for DANCE THEATER OF HARLEM, and subsequently performed at the Burgos International Music Festival.  It has since been performed uninterruptedly by many pianists and in inumerable venues.

The New York Times states that Adam Kent (see full review) “brings a virtuoso’s zest to the dance rhythms and bluesy clusters that cavort in the composition’s opening minutes. But he also offers a patient, less showy sensibility during the ruminative airs of the final minutes.” 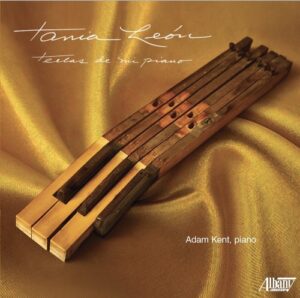