September 27, 2022: Meet the Composer at The National Opera Center

On September 28, the Weill Recital Hall at Carnegie Hall in New York will host the second concert by composer Jorge Grundman held in this prestigious concert hall. On this occasion, three internationally renowned interpreters, flutist Gili Schwarzman, cellist Alisa Weilerstein and pianist Eduardo Frías, join their talents to interpret a selection of the work for flute, cello and piano by Jorge Grundman. The recital will include three world premieres and one local premiere. The concert program includes works of the recent release of the prestigious Sony Classical company, Jorge Grundman: “Flute Works”. New York audiences will have the opportunity to hear three world premieres,

Lagerfeld in Winter. Sonata for flute and piano Op 77, Tan beautiful as you for trio Op. 91 y Facing Emotions for 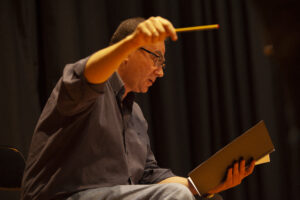 Jorge Grundman is a full professor at the Universidad Politécnica de Madrid and teaches in the Doctorate Program in Music and its Science and Technology. His father, Henri Grundman, a German by birth, emigrated to New York in 1938 and, as a New York citizen, obtained American nationality and met Ana Isla, whom he married at St. Patrick’s Cathedral.  In this way, the city of New York becomes for Jorge Grundman not only the home that welcomed his parents, his older brother, and his nephew but also the place where some of the most important scenes of his life are created, that would be permanently reflected in his musical work and in countless compositions inspired by the city and its inhabitants. As a result of his numerous walks around New York City, Jorge Grundman composed the cycle of four sonatas for flute and piano “The Warhol’s Four Seasons of New York” to which the two sonatas that can be heard at Carnegie Hall belong.